Starting advocacy with my son while he was in high school and both receiving Speakers of the Year Award our first year is difficult to put into words. We transformed something so tragic in our own lives and have helped pave the way for others to find their voice.

Pure determination. Self-examination and the desire to be happy. A lot of hard work throughout the years. That is how I found my inner strength to help establish who I actually am.

I had to decide to heal. No one else could do it for me. So, for those of you that feel alone, just know you are not alone. I used to think so. There are survivors you can lean on. But you have to want to be happy and heal for yourself–no one else. That is where it has to start.

I am an individual who has taken my personal story to thousands. I have helped those who are suffering and are afraid to ask for help; and I hope to avoid what happened to me from happening to others.

My life took an unexpected turn at fourteen; my uncle raped me. For the next 11 years, my life became a living hell. Long story short, my parents did nothing about the rape, they divorced, and I was sent to a boarding school. I later married an alcoholic who was physically and emotionally abusive toward me. I then finally found the strength to divorce. I later found myself in another unhealthy relationship and was engaged to a man who almost murdered my son, during which time he was also abusing me. That was my last straw–abusing my child. The cycle ended there.

I took these experiences and worked through them to reach the level of a true survivor. I became active in my community, which then led me to volunteering at a woman’s center with my son. I then started speaking at colleges, high schools, middle schools and church groups. I provide workshops at conferences and to several groups of “at risk” children throughout the area.

I am also dedicated to many organizations to the prevention of Domestic Violence, Sexual Assault and Child Advocacy. Some of these include, but are not limited to, RAINN–Speakers Bureau, Healthy Families Planning Cmte, Women’s Resource Center of the New River Valley, where I was the Sexual Assault Services Coordinator and also taught violence prevention programs to middle and high school students. 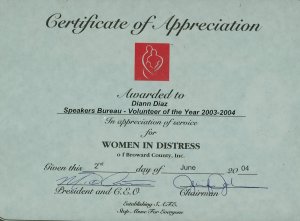 My son and I were also graciously named the “Speakers of the Year “, 2003-2004, by Women in Distress in Broward County, Florida.

Everything happens for a reason.

A Purpose Greater Than Sorrow